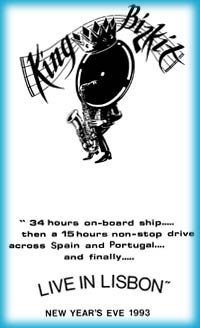 This is a promotional video showing the original Band (T.S.K.B.B.B.), playing a live concert in Lisbon, Portugal, on New Year’s Eve 1993, to an audience of 50,000 music fans, packed into the Main Square overlooking the Harbour. What you see was recorded live by Portugese TV, as it was being broadcast live throughout Portugal and into Spain as part of their New Year’s Celebrations and is completely un-edited.

At this time The Sensational King Bizkit Blues Band were still playing Blues, but since 1995 the line-up and musical policy has changed and grown, and the Band are now simply ‘KING BIZKIT’ and perform 2 hours of original music written by Richard Everitt and arranged by Jon Bower, the Band’s Bass Player and Musical Director.

The line-up of ‘KING BIZKIT’ is now a 15 piece Band and the Music is commercial up-tempo funky soul, with Jazz, Gospel & Swing overtones, which I describe as ‘Heavy Soul’.

I hope you enjoy the video and will want to book ‘KING BIZKIT’ for your Venue or Concert etc.
I look forward to speaking with you soon,
Keep Music Live,
RICHARD EVERITT.