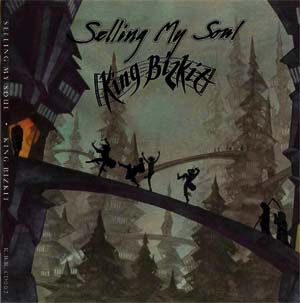 The promo cd was in the usual see-through sleeve, with track listings not even giving a hint of what was about to explode out of my Speakers!

I checked and found that Blues Matters had reviewed the Band's previous release 'Hooked On You' some time ago rather favourably, but do not recall hearing that Myself (some other lucky writer must have had that one!).

This takes You back to some of the classic sounds of the Blues and R&B of the 60's, like Butterfield Blues Band. With Gregg Wright having two of his songs recorded here in '...or Die Trying' and 'A Fast One', the cd also features some great musicians, such as Laurie Wisefield, who played the lead guitar parts, Adam Clarkson and Tim Ainslie on Guitars, Ian Gibbons and Reg Webb on Hammond and Piano, and John Lingwood and Kenrick Rowe on Drums.

1998 saw the decision by Richard Everitt to stop touring with King Bizkit until the new album was ready and released and to concentrate on producing a really outstanding album, to pay justice to Richard's superb song-writing!

Richard, along with Jon Bower, has been busy working on the album and come up with one to be very proud of! With this new album, King Bizkit will start touring again.

The styles cover the full range of Blues, Jazz, Soul, proper R&B, Swing and it works so very well, to keep You on your toes and joyful.

I'm sure this Band once back in action, will be a great Festival act and hopefully not only in Europe and America, where they seem better known, but also to grow on our home crowds as well. In these days of increasing all out electric Blues, this is simply SO refreshing to hear and every track is a gem in itself!