Demobox Review for 'Hooked On You' 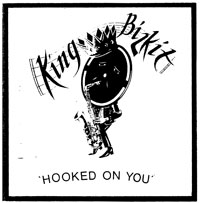 Richard Everitt has resurrected the King Bizkit Band and has re-released this EP cd from 1995, to help get the show back on the road. In fact the four tracks come from a session they did for Paul Jones back in 1992, at which time the band was a seven-piece including two guitars and two saxes. In fact, as I have a copy of the original release, I guess I must have reviewed it back then too. Yikes! That's 15 years ago!

The CD opens with Mayall's 'Another Kinda Love' with the horns honking away and the rhythm section pushing the song along. Richard is on fine form on vocals and both guitar (Adam Clarkson) and sax (Ben Weston) put in good solos. The title track is in a soul blues style with a funky beat and there is some high-energy guitar work from Mark Stuart. Next we move into r & b territory with 'A Good Fool Is Hard To Find' with the horns being right on the button. The last track is T-Bone Walker's 'Jealous Woman' with another good vocal performance from Richard and tasty guitar from Adam.

This is a good rocking r & b set with good arrangements and the Band sounding tight and together. It is good to know they are returning to the circuit. They have recorded a new album Selling My Soul, which will be out later in the Year and they are also planning to re-issue in CD format the live tapes that were put out in the early 90s.

The Band were a big draw in the 90s, so keep an eye out for when they are playing in your area.

Reviewed by R. Jim Greaves for Blues In Britain April 2010